My wife told me about the military coup just as I woke up on that morning (of 1st February, 2021). Although threats of a coup by the military drew concerns from people and became a topic for conversation in previous days, I did not think they would actually do so. I also did not think they would go so crazy with power or they would do such an insane thing. Clearly, there was no strong reason or situation for them to stage a coup. When I turned on TV in disbelief, I found out that MRTV (Myanmar Radio and Television) was broadcasting continuous videos of military songs and all other channels such as BBC, CNN, NHK and CNA were cut off. A news and information blackout by them began.

The first feeling came over me was being ashamed. Deeply. For I was living in the country where the military leaders with guns in hands but with no brains in heads seized power of the nation and its people by force. To borrow the words of Guterres (UN Secretary General Mr. Antonio Guterres), “Coups have no place in our modern world”. Frankly, all military leaders in Myanmar had abused the country to pleasure themselves and after them, their followers kept raping. By taking the country as a woman, image of such an unpleasant situation can be seen in one’s mind. It is also like a horror movie too as all attempts fail but one gets back to the same place over and over again. (It is called “hallucination in a haunting jungle” in Myanmar.) The first coup was in 1962 and the second time was in 1988. Now in 2021, the country is set back there again. While other countries are competing internationally for achievements in 21st century and making every move to be ahead in every aspect such as political, economic, social, technology and art, our country gets stuck in the 1962 time zone repeatedly.

All expectations, aims, wishes and efforts of citizens, especially the young ones or students, are melted into air. We actually are going through the time harder than a dark age and do not even have blurry vision. We get up when morning comes, with no idea what to do. Time seems stand still and stop. Such the same, unchanged moments are looping here around us. Markets, shopping malls and banks are closed, every single bus-line was stopped, express bus services are no longer working, train services are not available, ports and airports are closed too, and cities become quiet as the grave.

In fact, people were trying to hear the voices of state leaders and ready to follow their instructions. But all the top leaders were detained by military junta. On the morning of 2nd February, the younger generation could not wait in silence anymore as they came to understand the real situation. In the belief that “every carriage has its own engine”, Myanmar Spring Revolution was started. People, young and old, bang pots and pans in many parts of the country at 8 o’clock every night to make noise in opposing the coup.

Banging pots, pans and tin baskets to drive away evil is one of the Myanmar’s olden-day traditions. When there is a threat to life due to a pandemic or a disaster, evil spirits is regarded as a cause of disaster and they are driven out by beating tin basket. Normally on every evening of Myanmar New Year’s Day, monks recite Suttas and people bang pots and pans in rural areas to ward off evil or harm.

Most of the artists, including me, cannot focus on our works well starting from the day the coup began. We try to participate in whatever way we can in the protest movements: some join the protests in the streets; some draw posters and make boards for those protesters; some create artworks and sell them to donate CDMers(employees participating in civil disobedience movement) in need; and some join the EOAs(ethnic armed organizations) in the belief that the success of revolution depends on the fight back by taking up arms.

Before the coup, I was able to concentrate on my works all the time. Even a solo show “Primeval Codes” is made in Yavuz Gallery, Singapore, in 2020. All the works there are realized during 2019-2020, based on the primitive signs and symbols of ancient alphabets learned starting from 1980s, and public signs of transportation being learned until today. Every sign and symbol from ancient time has a meaning to communicate each other in a short way. The meaning of each sign and symbol is determined, accepted and used by a group or a community. But sometimes, the same symbol has different meaning accepted by different groups. It is interesting that how it become. I choose a sign from ancient time and took a meaning what l prefer, and which became the title of the work. It is definitely sure that is not an abstract matter.

Back in early 1990s, I tried to create artworks that go along with the environmental situation which, maybe somewhere indoor or outdoor, support my idea. I like turning the challenge into the strengths of works by dealing with these various unexpected challenges coming up from the environment. I feel that the bigger difficulties come up in relation with politic, social, cultural or environmental limitations, the greater strength the work gets by overcoming the difficulties.

My first environmental work was 〈Narcissus〉(1987-1994). But I did not aim to simply illustrate Narcissus. Though the work was based on a Greek legend, I wanted to depict narcissism at all times: narcissism in politics, narcissism in business, narcissism in nationalism, narcissism in racism and narcissism in individualism or in oneself. We all are trapped by narcissism, I think. It took seven years to complete because, as I tried to solve some difficulties. Meanwhile, I imagined a variety ways to realize my concept. What I really wanted to do was to create it on a grass lawn, just for a day or two, to enjoy it alone. It took times to finding the right lawn that was also wide enough. Once I placed the work on the grass for the first time, the first things I saw were clouds with silver linings in the mirror, like the clouds from another world. I also saw myself, not as me there, but Narcissus instead. 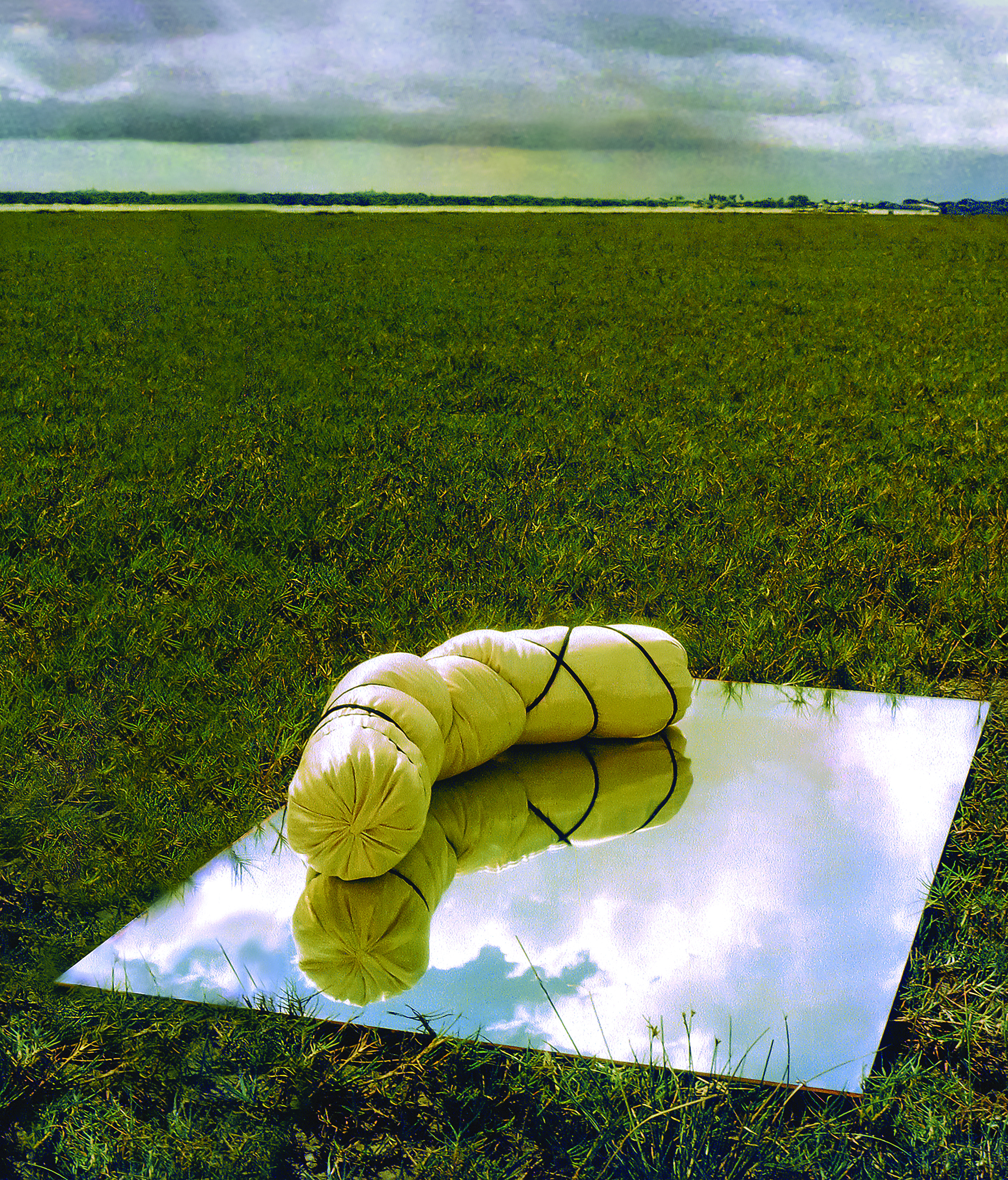 My last site specific work was 〈Negative Space #9〉 which showed in the 2018 Guang’an Field Art Biennale, China. “Negative space” means neither a negative statement nor a negative mode of stating something, nor the aspect of a question which is opposed to the positive side literally. It means ‘an effort to approach alternative ways to the spaces around us or the space beyond world ’. To put it simply, it was trying to show a mould or a reverse side of a piece of sculpture never seen by the audience.

Relating the space in the work, I, for the first time, noticed it in; 〈Woman Combing Her Hair〉(1915) by Archipenko, a Russian sculptor. In that sculpture, he cut out the face of the figure and left the void as a head. Before him, nobody expressed the space as a solid form. And I noticed again the space in the sculptures of Henry Moore, a British sculptor. In some of his sculptures, by cutting out some parts of human body, he powerfully arranged the relationship of hollows to mass. Then, I had a desire to present the space only as a solid form. One night considering those facts, I had a dream and in that, I saw something like “Negative Space” was installed in a huge hall. When I had regained consciousness, I did not know what it meant yet. One month later, I was aware that was what I wanted.

And again, I have to say something concerned with the form. It is very old and can be seen above the Buddha statues in Myanmar and everywhere concerning religious sites. According to the scripture of Buddhism, the future Buddha (Arimiteija, the last of the five Buddhas, and the one who is coming to spread enlightenment in this world) donated a canopied ceiling (we call it ‘bei-dan’) to Godama (the fourth one who had enlightened already). As the consequence, when he gets enlightenment, there will be a ceiling wherever he is.

Most of my works are related with Buddhism in some ways. Some were created by referencing directly from the Buddha Abhiddhamma (the higher teaching of the Buddha). For example, the five paintings series: Pathavi, Tejo, Apo, Vayo, Akasa, the collections of Mori Art Museum, Tokyo are based on Abhiddhamma definitely. And some were made by applying some traditional forms of Buddhist culture. For example, 〈Red Cube〉. I just simply tried to show my idea without personal feeling of the artist. But I have been dealing with variety of subjects and making art works with multiple approaches. Of course, the forms of some pieces were minimal, I realized. This is partly because I like the few touches, simple structures and forms which is just-right. I did not aim them to be concerned with minimalism. 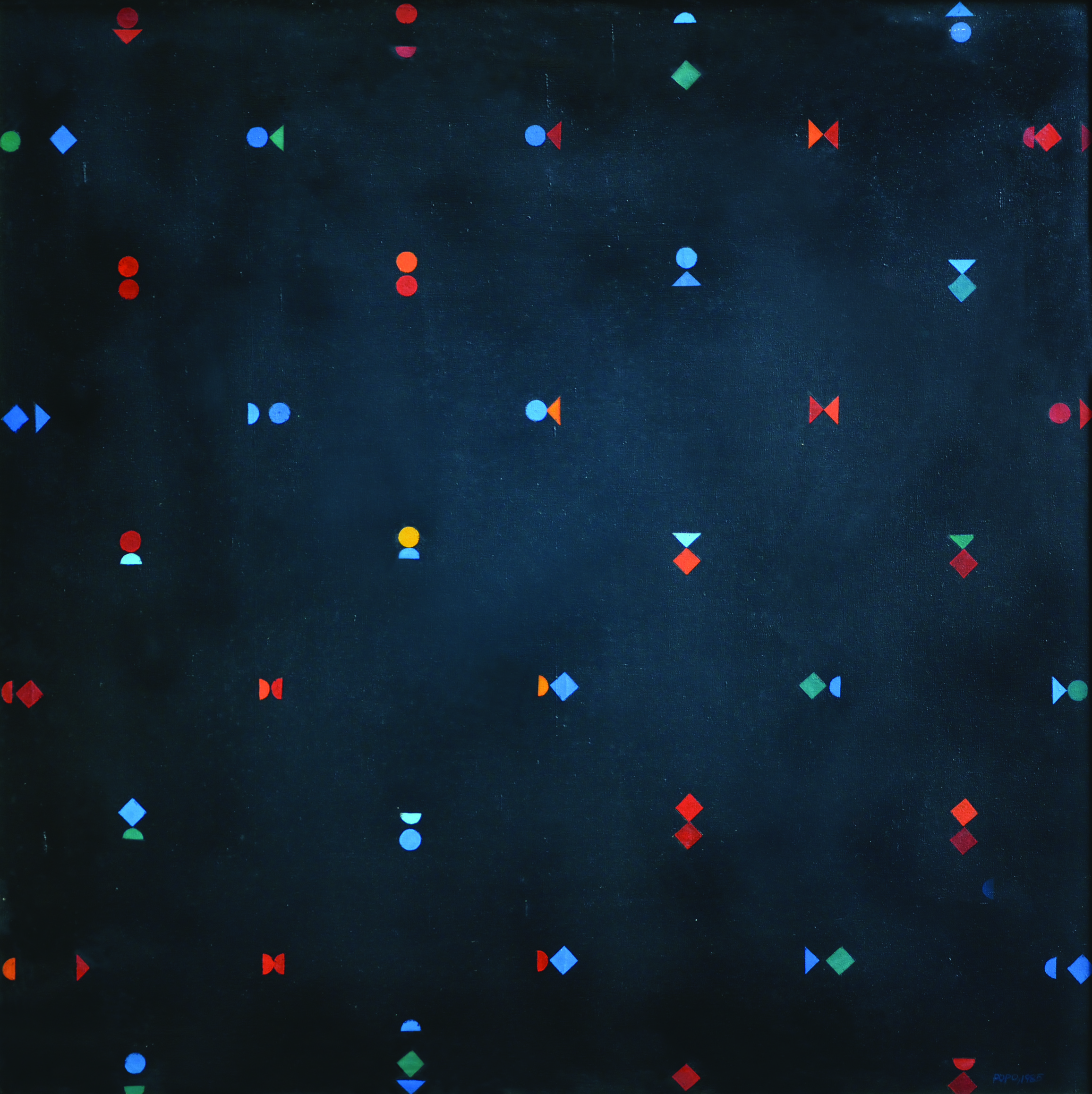 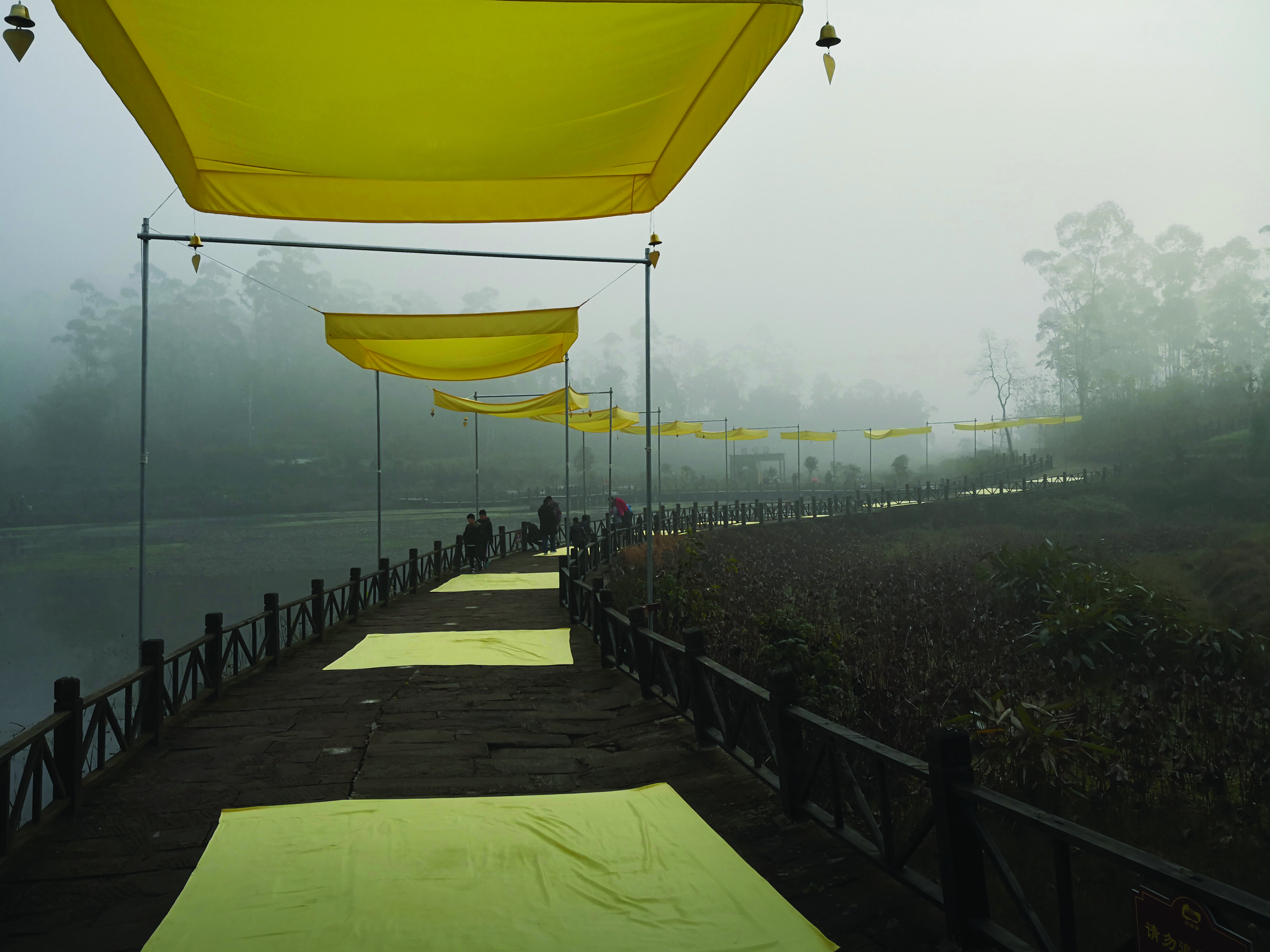 Actually, I also participated in 〈3rd Gwangju Biennale〉(2000). I felt delighted as I was one of the artists there and also excited to be in Gwangju for the very first time. Because I knew long ago that in the city of Gwangju in Korea, the democracy uprising was started in 1980. I took time to go to downtown Gwangju where protestors gathered to show my respect towards them after finishing the work installation at the exhibition hall. Lastly, I would like to take this chance to thank all countries and people that stand with Myanmar people and support our Revolution on the way with their heart and soul, especially Korean who take the active part.

Our country is in that same circumstance with democracy uprising today. If everything that happens in this world is the consequence of the cause according to the law of karma in Buddhism, then what kind of collective sins did we, more than 50million people, commit against those military groups of about 500,000members, in our past lives? I thought that if we are suffering because of our collective karma, we can only survive from this situation by means of another collective karma. We, the civilians, are fighting for democracy and human rights by sacrificing lives, families and properties. Hence, we must win. We have decided to fight in any way we can until the end. Because we also know that if we fail this time and have to stay again under the control of the cruel, inhuman and heartless military junta, we will have to glad just to look up their faces with their permission “Behold the king!”, like the old monarchs.